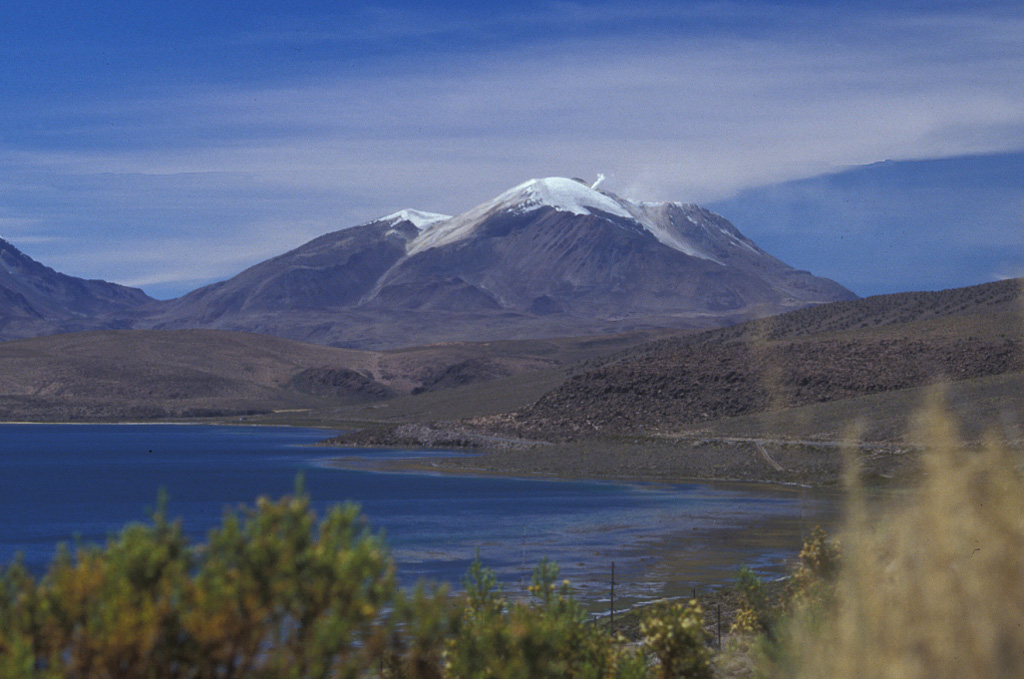 
OVDAS-SERNAGEOMIN reported that at 0004 and 0517 on 31 May volcano-tectonic events at Guallatiri with local magnitudes of 3.5 and 3.7, respectively, were detected by the seismic network. Very minor deformation was also detected. No other changes were observed in recent months; white plumes continued to rise 200 m. The Alert Level was raised to Yellow (the second lowest level on a four-color scale).

[This activity was initially attributed to Acotango in the Quimsachata Volcano Group. It is now thought to have originated from Guallatiri, further along the same line of sight as Acotango (figure 1). Investigation of Acotango volcano in 1987, by Oscar González-Ferrán, revealed no evidence of a recent eruption.]

The quoted material is a report from Robert Koeppen. "On 1 December at 0750, Robert Koeppen (USGS), Walter West (U. S. Embassy, La Paz, Bolivia), and Jaime Jauregui (Geological Survey of Bolivia) observed steam plumes erupting from a source near the crest of Nevados de Quimsachata. The observation was made from a point about 25 km to the NNE, near the W base of Volcán Nevado Sajama, Bolivia. Visibility was initially excellent, but within about 45 minutes cloud cover completely obscured the mountain's summit. Intervening peaks prevented exact determination of the vent, but the eruption appeared to originate from Cerro Acotango, either from the main summit or possibly immediately to the NW. If the eruption plume came from Volcán Guallatiri, the next possible source area along the line of sight, then it would represent a significantly larger eruption (figure 1).

"The eruptions produced white, billowing clouds that rose vertically above the Quimsachata crest, perhaps about 500 m, then drifted W. The eruptions occurred in episodic bursts, and, based on first sightings of the plumes, at intervals ranging from 45-75 seconds. One large plume drifted more NW and appeared to trail a curtain, possibly of ash fallout. Several bursts seemed particularly vigorous and appeared to consist of several plumes coalescing at higher levels."

Chilean forest service personnel based near Lago Chungara, roughly 20 km to the NW, reported that they had seen no activity, but visibilities in the area are frequently poor.

No eruptions are known in historic time from Cerro Acotango, but Yoshio Katsui and Oscar González-Ferrán (1968) mapped it as Holocene. Four historic eruptions bave been reported from Guallatiri, most recently in December 1960. Chilean geologists note that fumarolic activity from Guallatiri is apparently continuous but less vigorous than the plume emission observed 1 December.

"During a reconaissance in the Nevados de Pachayata/Nevados de Quimsachata region between 2 and 5 December, vigorous fumarolic activity was observed at Guallatiri. The activity was much more intense than in previous years and the emissions were more frequent, occurring about every 30 minutes. Whitish-yellow columns rose 300-500 m above the volcano's central dacitic dome. Nearby secondary fumaroles extended from the principal vent onto the W part of the volcano (figure 2).

"In December 1985, Robert Koeppen had observed (from the base of Sajama volcano 25 km to the NE) strong fumaroles that appeared to be from Acotango. During the 1987 reconaissance, the volcanoes Capurata, Acotango, and Humarata did not show any signs of activity; their craters were covered with ice and clean snow. Consequently, we believe that the activity observed by Koeppen was not from Acotango, but from Guallatiri [farther along Koeppen's line of sight from Sajama; see map in 10:11], which recently has notably increased its activity."

Two strongly active zones of fumaroles were observed during a summit visit on 2 November 1990. The more intense fumaroles, 80 m below the . . . summit, produced a plume 200 m high accompanied by a jet-engine noise. Some boiling mud pools were also seen. The second zone, on the S side of the volcano at ~3,000 m elev, contained about 10 fumaroles. The volcano was otherwise snow-covered.


There is no Deformation History data available for Guallatiri.


There is no Emissions History data available for Guallatiri. 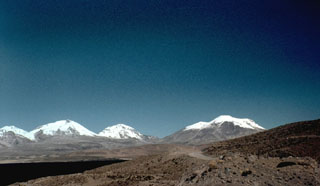 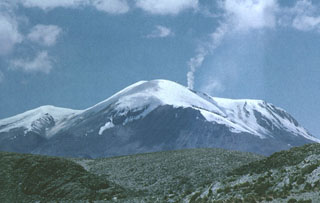 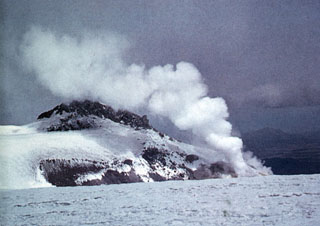 This prominent fumarole is located in the summit region of Guallatiri volcano. The vigorous fumarole lies 30 m below the summit on the western side and produces a very audible "jet-like" noise. Many solfataras are located along a 300 m section of the upper west flank of the volcano, and another five fumaroles are located on the south side of the central cone. 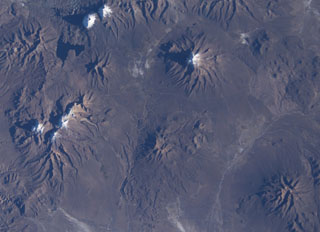 Snow capped volcanoes dot this NASA Space Shuttle image (with north to the upper right) taken along the Chile-Bolivia border. The snow-capped peak at the far left-center is Guallatiri volcano, and to its right are the three peaks of Nevados Quimsachata, which includes Acotango volcano. The twin peaks at the upper left are Pomerape and Parinacota, with Laguna Chungara below. Nevado del Sajama in Bolivia lies at the upper right-center. At the lower right is the snow-free volcano of Macizo de Larancagua.


There are no samples for Guallatiri in the Smithsonian's NMNH Department of Mineral Sciences Rock and Ore collection.