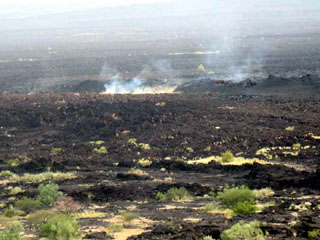 
A large sulfur dioxide plume and several thermal anomalies from Manda Hararo that were detected in satellite imagery during 28-30 June prompted a science team to visit the area on 4 July. After conducting ground-based and aerial observations for approximately 2 hours, they reported that the eruption occurred near the August 2007 eruption site, and was possibly bigger than that event. No active lava effusion was seen, but steaming was observed from the 4-5 km-long fissure that, because of high temperatures, had to be observed from a distance. They also saw new predominantly 'a'a lava flows that were 2-3 m thick. The fissure was lined with scoria ramparts 30-50 m high. Temperature measurements taken with a FLIR (Forward Looking Infrared Radiometer) indicated that the lava flow had cooled significantly with temperatures between 30 and 120 degrees Celsius at the surface. A maximum temperature of 238 degrees Celsius was measured during aerial observations.

Geological Summary. As the southernmost axial range of western Afar, the Manda Hararo complex is located in the Kalo plain, SSE of Dabbahu volcano. The massive 105-km-long and 20-30 km wide complex represents an uplifted segment of a mid-ocean ridge spreading center. A small basaltic shield volcano is located at the N end of the complex, S of which is an area of abundant fissure-fed lava flows. Two basaltic shield volcanoes, the larger of which is Unda Hararo, occupy the center of the complex. The dominant Gumatmali-Gablaytu fissure system lies to the S. Voluminous fluid lava flows issued from these NNW-trending fissures, and solidified lava lakes occupy two large craters. The small Gablaytu shield volcano forms the SE-most end of the complex. Lava flows from Gablaytu and from Manda overlie 8,000-year-old sediments. Hot springs and fumaroles occur around Daorre lake. The first historical eruptions produced fissure-fed lava flows in 2007 and 2009.