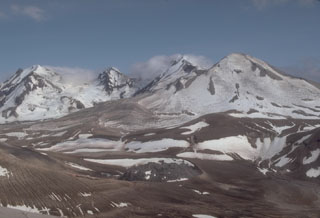 
AVO raised the Aviation Color Code for Trident to Yellow (the second lowest level on a four-color scale) and the Volcano Alert Level to Advisory (the second lowest level on a four-level scale) on 29 September due to an ongoing seismic swarm. The swarm began on 24 August and within about four days the seismic network began detecting episodes of weak seismic tremor and low frequency earthquakes. The events were initially located at depths around 25 km, but then they progressively shallowed to around 5 km by 28 August. Earthquakes were located 3-6 km deep since then, though some deeper events were recorded. AVO attributed the swarm to moving magma or magmatic fluids and noted that seismic swarms had previously been recorded with no subsequent eruptions.

Geological Summary. The Trident stratovolcano cluster was named for the three prominent peaks that were the most visible features at the summit prior to 1953. The andesitic-dacitic group consists of four overlapping stratovolcanoes and numerous flank lava domes, including Falling Mountain and Mt. Cerberus on the far west flank. The summit complex is located 3-5 km SE of Novarupta volcano, and merges along a ridge to the NE with Katmai. The three oldest Trident volcanoes are glaciated and Pleistocene in age, while the youngest, Southwest Trident, was formed during historical time. Eruptions migrated through time from the NE to the SW. In 1953 a new lava dome began growing on the SW flank of Trident I volcano. A series of thick andesitic lava flows were erupted between 1953 and 1968, forming a cone with 400-800 m of local relief. Periodic explosions took place until 1974, and the current summit contains a 350-m-wide crater. Some of the distal lava flows from West Trident stratovolcano collapsed into the Novarupta vent during its 1912 eruption.