Ash eruptions occurred on 3 and 15 November 1991, ejecting columns to a maximum of ~150 m above the crater rim. Since then, an average of 47 shallow earthquakes have been recorded monthly, and a white vapor column continued to rise to ~ 50 m above the crater.

The Global Volcanism Program has no Weekly Reports available for Iliboleng.

VSI reported that an ash eruption began on 17 November at 0615. The ash column rose ~ 1 km and was blown N, causing thin ashfalls on nearby villages. The eruption ended after several hours. As of mid-Jan, no additional activity had been reported. Press sources noted that the eruption was preceded by a moderately strong, felt earthquake on 15 November at about 2300.

Iliboleng erupted on 28 May at 1735. A single explosion ejected incandescent material and caused ashfall on a nearby plantation and several villages both E and W of the summit (Lamalota, Dua Muda, Tuawolo, and Kiwangona). The incandescent ashfalls caused grass fires in the very dry area (no rain reported since February) that burned 700 hectares of grass W of the volcano and 250 hectares to the E. About 570 people were evacuated from several villages after the initial explosion and grass fires, but returned to their homes 31 May.

On 2 June at 0500, weather had cleared and a white vapor cloud of ~100 m height was reported. B-type earthquakes were recorded in the area on 21 May, but no more seismic data were available.


Renewed explosions after 12 days of seismicity

Since 20 June, a plume has risen as much as 300 m above the summit. The number of shallow volcanic earthquakes increased to ~20/day 20-25 June, compared to 1/day previously. No eruptive activity has been reported since November.

During July, white plumes continued to be emitted to 300 m above the peak. Several shallow volcanic earthquakes were recorded daily during early July. In late July, seismic activity had returned to low background levels.


Explosion deposits ash on nearby village

A large explosion occurred on 2 October at 2252, depositing a light dusting of ash on villages near the volcano.

A large explosion on 2 October at 2252 deposited a light dusting of ash in about a 15 km2 area around the volcano. During the week of 9-15 October, white fume was continuously present above the crater, rising to heights of 300 m. During that week, about 13 tectonic and 11 volcanic events were recorded/day.

In July, fumarole temperatures in the crater were 60-70°C. On 15 July, an MM II earthquake was felt. The number and types of earthquakes recorded were: 131 distant tectonic, three local tectonic, two volcanic A-type, and 144 volcanic B-type. The volcano's level of activity is slightly higher than normal.

Ash eruptions occurred on 3 and 15 November 1991, ejecting columns to a maximum of ~150 m above the crater rim. Since then, an average of 47 shallow earthquakes have been recorded monthly, and a white vapor column continued to rise to ~ 50 m above the crater.


There is no Deformation History data available for Iliboleng.


There is no Emissions History data available for Iliboleng.

Iliboleng volcano at the SE end of Adonara Island, east of Flores Island, is a symmetrical stratovolcano with many partially overlapping summit craters. Iliboleng is seen here from Bukit Tomu, north of the volcano. Explosive eruptions from the summit crater have been recorded since 1885. Only one historical eruption, in 1888, produced a lava flow. 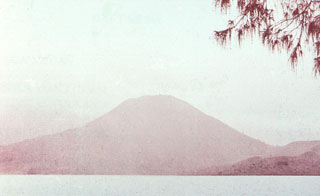 Iliboleng volcano rises above the Boleng strait between Adonara and Lomblen Islands, at the eastern end of the Lesser Sunda (Nusa Tenggara) Islands. The symmetrical volcano, which occupies the SE corner of Adonara, is seen here from the NE tip of the island. The 1659-m-high stratovolcano, the only historically active volcano on the island, is one of the most active in the Lesser Sundas. 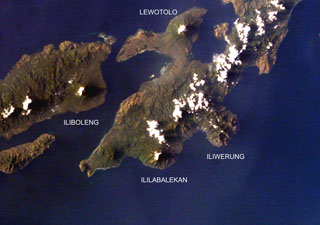 Four volcanoes are seen in this NASA Space Shuttle image (with north to the upper left) of Solor (lower left), Adonara (upper left), and Lembata (right) Islands. Ililabalekan volcano on SW Lembata (formerly Lomblen) Island is the only one of these without historical eruptions, although fumaroles are found near its summit. A satellitic cone was constructed on the SE flank of the steep-sided volcano, and four craters, one of which contains a lava dome and two small explosion pits, occur at the summit of Mount Labalekan. 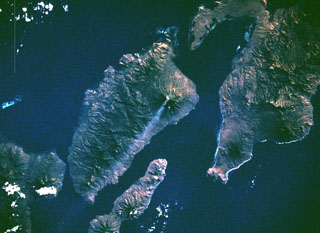 An eruption at Iliboleng began on 11 May 1983 when an ash plume rose to 500 m. Ash and incandescent ejecta was reported on 13 July and fine ash occasionally fell from the plume on 15 July. On 4 September space shuttle astronauts photographed this small diffuse plume 50-70 km long, and an ash plume was reported again on 22 September. A 500 m ash plume was seen for a few minutes on 24 November, and additional plumes were emitted on 3 January and 13 April 1984 to a maximum height of 1 km.


There are no samples for Iliboleng in the Smithsonian's NMNH Department of Mineral Sciences Rock and Ore collection.