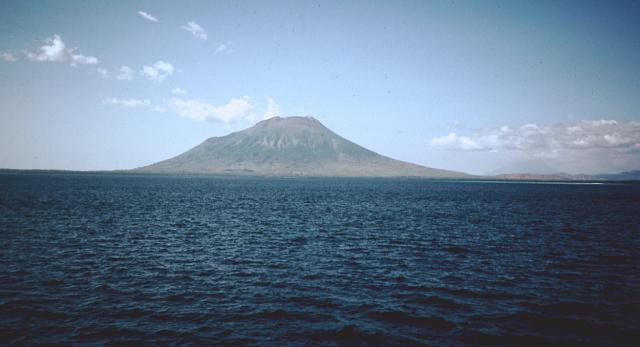 
PVMBG reported that white plumes rose as high as 50 m above Lewotolo’s summit crater rim. The Alert Level remained at 2 (on a scale of 1-4).

During December 2011-January 2012, Lewotolo's seismic activity increased and the volcano produced thick, white plumes that rose as high as 250 m above the summit before subsiding (BGVN 36:12). Since that episode, no further activity was observed through 31 December 2016, except for several thermal anomalies during 27 September 2015-4 October 2015, as recorded by MODIS satellite instruments analyzed using the MODVOLC algorithm (figure 2).


PVMBG reported that white plumes rose as high as 50 m above Lewotolo’s summit crater rim. The Alert Level remained at 2 (on a scale of 1-4).


The number of shallow and deep volcanic earthquakes at Lewotolo recently increased, prompting PVMBG to raise the Alert Level from 1 to 2 (on a scale of 1-4) on 7 October. The report noted that the public should not enter the 2-km-radius exclusion zone around the crater. Solfatara emissions rose as high as 500 m above the crater rim on 9 October; emissions during 1 August-6 October rose 50-600 m. BNPB reported that five earthquakes recorded by Badan Meteorologi, Klimatologi, dan Geofisika (BMKG) on 10 October ranged in magnitude between 3.9 and 4.9, and were located 10-30 km below Lewotolo. The events were felt by local populations, causing an evacuation of 723 people. Preliminary data suggested that five homes were damaged from rock avalanches, triggered by the earthquakes.


On 25 January CVGHM lowered the Alert Level for Lewotolo from 3 to 2 (on a scale of 1-4) based on decreased seismicity and visual observations during 5-15 January. During 5-15 January fumarolic plumes rose 200-500 m above the summit and incandescence was observed.


According to news articles, 500 people have evacuated their homes on 6 January because of increased activity at Lewotolo. Black smoke rose from the crater and rumbling sounds were reported. On 2 January CVGHM raised the Alert Level from 2 to 3 (on a scale of 1-4).


CVGHM reported that white plumes rose 50-250 m above the summit of Lewotolo during the month of December. Seismicity increased on 31 December and intensified on 2 January, the same day incandescence was observed. Based on visual and seismic observations, CVGHM raised the Alert Level from 1 to 2 (on a scale of 1-4) on 2 January, then later that day raised the Alert Level to 3.


DVGHM stated that the pilot report of a plume emitted from Lewotolo on 25 June was false. Further investigation revealed that the emission was actually from Egon.


A pilot reported that a thin plume emitted from Lewotolo was at a height of ~300 m above the summit on 25 July. Ash was not visible on satellite imagery.

Plumes and seismic activity at Lewotolo volcano, Indonesia, increased during December 2011 and early January 2012. Lewotolo has erupted potassic calc-alkaline lavas containing as an accessary phase in vessicle fillings, the rare, complex zirconium-titanium-oxide mineral zirconolite (Ca0.8 Ce0.2 Zr Ti1.5 Fe2+0.3 Nb0.1 Al0.1 O7; de Hoog and van Bergen, 2000). Lewotolo last erupted in 1951. All historical eruptions were small (Volcanic Explosivity Index, VEI 2) with the exception of the first recorded eruption, which took place in 1660 and was as large as VEI 3. According to de Hoog and van Bergen (2000), strong fumarolic activity at the summit of Lewotolo indicates the presence and degassing of a shallow magma chamber.

December 2011-January 2012 activity increase. According to the Center of Volcanology and Geological Hazard Mitigation (CVGHM), Lewotolo produced thick white plumes reaching 50-250 m above the summit during December 2011. Seismicity increased on 31 December, and intensified on 2 January 2012 with tremor commencing at 1400. Accordingly, CVGHM raised the Alert Level from 1 to 2 (on a scale from 1-4) at 1800 on 2 January. Between 1800 and 2300 the same day, the maximum amplitude of recorded seismicity increased, and at 2000, incandescence was noticed at the summit.

At 2330 on 2 January, CVGHM increased the Alert Level to 3. Under the recommendation of CVGHM, access was prohibited within 2 km of Lewotolo (Hazard Zone III, figure 1), and residents in villages SE of the volcano were advised to keep vigilant and secure a safe place to flee to one of the towns to the N, W, or S in the event of an eruption.

Residents decide to evacuate. According to Antara News, evacuations began on 4 January spurred by increased activity of the previous few days, as well as minor ash falling in the villages. Antara News stated that most of the residents went to Lewoleba, the closest city to the volcano (~15 km to the SW of the summit). Of the evacuees in Lewoleba, all but about 50 people were reported to have found temporary housing with other residents of the city.

On 5 January, Channel 6 News reported that around 500 residents had evacuated leaving their homes in villages surrounding Lewotolo. They noted that residents who evacuated did so on their own accord, as the government had not yet called for evacuation. The Deputy District Chief of Lembata, Viktor Mado Watun, said "Black smoke columns are coming out of the mountain's crater, the air is filled with the smell of sulfur while rumbling sounds are heard around the mountain."

According to UCA News on 9 January, the health of the evacuees was cause for concern. Father Philipus da Gomez stated that "there are many refugees who have started suffering from acute respiratory infections."

Alert Level lowered. On 25 January 2012, CVGHM lowered the Alert Level of Lewotolo from 3 to 2 following decreased activity after 2 January. The lowered Alert Level restricted access to the summit craters only. CVGHM stated that the observed seismicity (table 1) showed a declining trend, tending towards normal conditions after 23 January. Visual observation revealed thick, white plumes reaching 400 m above the summit during 2-14 January (and a dim crater glow), and thin white plumes reaching no more than 50 m above the summit during 16-24 January (with no accompanying crater glow).

Table 1. Seismicity at Lewotolo during 3-24 January 2012, showing a declining trend in seismicity prior to CVGHM's lowering of the Alert Level from 3-2 on 25 January. Data courtesy of CVGHM.

On 15 January, direct observation of the crater was made, and revealed incandescence in solfataras, a weak sulfur smell, and hissing sounds in both the N and S side of the crater. CVGHM especially noted that the N side of the crater was quite different than when it was last observed in June 2010, when no solfataras were present. Differential Optical Absorption Spectroscopy (DOAS) measurements revealed fluctuating and increasing SO2 flux between 11-90 tons/day during 8-16 January.

During December 2011-January 2012, Lewotolo's seismic activity increased and the volcano produced thick, white plumes that rose as high as 250 m above the summit before subsiding (BGVN 36:12). Since that episode, no further activity was observed through 31 December 2016, except for several thermal anomalies during 27 September 2015-4 October 2015, as recorded by MODIS satellite instruments analyzed using the MODVOLC algorithm (figure 2).


There is no Deformation History data available for Lewotolo.


There is no Emissions History data available for Lewotolo.


There are no samples for Lewotolo in the Smithsonian's NMNH Department of Mineral Sciences Rock and Ore collection.