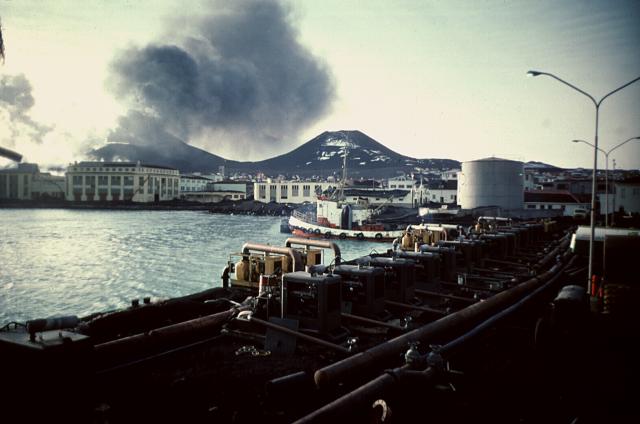 After three months of continuous activity, S. Thorarinsson reported on 21 April that the Heimaey eruption is slowly abating. The explosive activity is now intermittent and the estimated lava production is less than 5 m3 per second. The area of the lava flow is 2.1 km2, and the average thickness is about 70 m. The height of the volcano is approximately 220 m.

The Global Volcanism Program has no Weekly Reports available for Vestmannaeyjar.

The following cable was received . . . on 23 January 1973. "An intense volcanic eruption on the vast side of the mountain Helgafell, Vestmannaeyjar, Iceland, was observed at 0155 GMT on 23 January 1973. Lava is flowing eastwards from a fissure some 1,500 m long. Approximate location: Latitude 63°26' N, Longitude 20°16' W. The eruption was preceded by a swarm of small earthquakes on 22 and 23 January. The largest earthquake was 2.6 on the Richter scale. The nearby town of Vestmannaeyjar, inhabited by about 5,000 people, has been mostly evacuated to the mainland. No casualties."

The following information was obtained through telephone and telegraphic contact with the Icelandic Meteorological Office. "The Helgafell eruption continues. The fissure is 1.6 km in length and on the eastern slope of the volcano. At first, mostly lava fountains characterized the eruption, but now there is a great quantity of smoke. The fissure extends in a straight line and trends in a direction NNE-SSW. It extends into the sea at both ends, and small islands seem to be forming near the coast under the sea as lava continues to extrude from the fissure. Fire and pyroclastic clouds are visible, and the lava fountains reached 375 feet in height.

The following cables were received . . . on 26 January.

[The following was received from the Icelandic Marine Research Institute.] "Ecological changes in sea strictly local and will not have any economic effects. Land vegetation badly damaged by lava and airborne material at least in the neighborhood of the eruption. Effect on other systems on land, such as vegetation further away and bird populations, still known. Lava continues to pour into the harbor and water temperatures have reached 111°F. AT least five houses were destroyed by fire started by the lava. The 1.6 km rift has become partly filled with lava. One main crater and several smaller craters are expelling fire, smoke, and lava."

The following cable was received . . . on 26 January. "Flight over Heimaey at 2200 local time on 26 January revealed activity concentrated in northern sector of fissure zone. Strongest fountaining is from new cone at southern terminus of this sector now built to about 120 m above sea level. Fountaining rises an additional 150 m above cone. About six other smaller fountains at about 100 m intervals to north along fissure. Lava flowing mainly northwards forming bench which now extends for at least 500 m out from coast. Six houses have now been set alight in Kaupstadur by hot tephra."

The NOAA-2 satellite made a pass over the Helgafell eruption at 1040 UT on 24 January 1973. The instrument used was a very high resolution radiometer (DHRR). The DHRR has two spectral centers—two central bands—one in the thermal infrared at 10.5 and 12.5 µm, and the other one at .6 and .7 µm. On the infrared image the eruption showed up in both the thermal and the visible as 8 resolution elements. The eruption cloud showed up trending approximately E-W, going in an easterly direction from the source of the cloud in the west. The eruption cloud was 60 km long and its maximum width was 12 km.

Iceland, which was dark at the time, was not picked up as a visible image. However, the satellite did observe the eruption cloud, which was illuminated by the sun at the same time on 25 January at 1040 UT. It observed essentially the same pattern as the thermal.

What is most interesting about the visible image is that you can see the fissure aglow with the molten lava. The volcanic eruption on Heimaey shows up as a very thin, faint line which is oriented N to NE. The resolution of the DHRR system in both visible and infrared is 0.8 km. It is a fairly extraordinary series of images.

The following information was received by cable on 13 February 1973. "On 13 February the eruption was still continuing. The area of the lava flow is now 3 km2, and the volume is about 110 million m3. The composition is gradually changing from hawaiite to more normal basalt. The harbor is now nearly closed due to the lava flow, but the amount of tephra fall is relatively small. The height of the new cone (tentatively called 'Kirkjufell') is 160 m and the estimated rate of flow is now 60 m3 per second [on 8 February]."

A new development on Heimaey on 19-20 February originally appeared to increase the threat to the town of Vestmannaeyjar. According to a cable received on 23 February, however, "the development in Vestmannaeyjar on 19-20 February did not increase the threat to the town. The part of the crater wall facing the town slowly 'glided out' and subsided about 120 m distant. The lava now flows east and northeast. The greatest danger if the eruption lasts for a long time is still the lava flow. The lava is now thin-flowing and the latest temperature was 1,090°C, as measured by the physicist, Dr. Sigurgeirsson."

Helgafell status as of 9 March 1973: The eruption is now considered moderate. Tephra is still falling, but is rather minor compared to the fall during the early part of the eruption. It is being blown out to sea. The principal characteristics of the eruption are the lava flow and the intermittent explosions. The lava is flowing out to sea, and is 30 m away from closing off the entrance to the harbor. Gases seeping in to the cellars of the homes have become a serious problem. These gases are CO, CO2, and SO2.

S. Thorarinsson reported by cable on 24 March that there has been no increase in the activity of the Heimaey volcanic eruption. The lava production has been approximately 10 m3/s since 17 March. Lava has covered at least 80 houses in the eastern part of the town, including 23 on the night of 22-23 March, but no more since then. The lava is somewhat more thin-flowing than before.

After three months of continuous activity, S. Thorarinsson reported on 21 April that the Heimaey eruption is slowly abating. The explosive activity is now intermittent and the estimated lava production is less than 5 m3 per second. The area of the lava flow is 2.1 km2, and the average thickness is about 70 m. The height of the volcano is approximately 220 m.


There is no Deformation History data available for Vestmannaeyjar.


There is no Emissions History data available for Vestmannaeyjar.


The following 31 samples associated with this volcano can be found in the Smithsonian's NMNH Department of Mineral Sciences collections, and may be availble for research (contact the Rock and Ore Collections Manager). Catalog number links will open a window with more information.