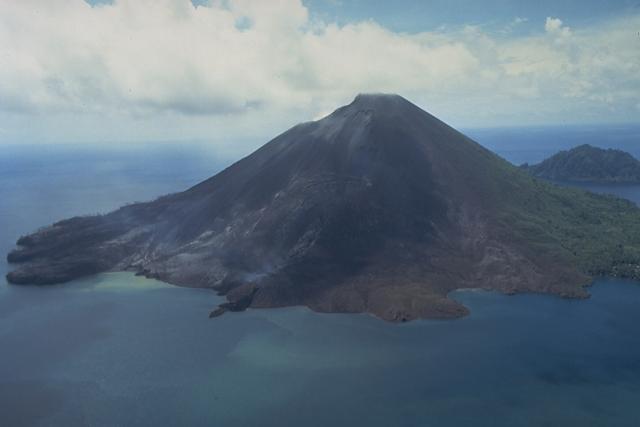 
PVMBG reported that seismicity at Banda Api had been increasing since the beginning of March, though during 1-4 April seismic patterns were similar to those recorded before an eruption in 1988. The Alert Level was raised to 2 (on a scale of 1-4); visitors and residents were warned not to approach Banda Api within a 1-km radius of the summit area.

By July 1989, the volcano's activity approached background level. White weak fumes reached 25-35 m above the summit crater and 5-10 m above the N and S craters during the last week in July. Three volcanic A-type, 49 volcanic B-type, one degassing, and 165 tectonic earthquakes were recorded.


PVMBG reported that seismicity at Banda Api had been increasing since the beginning of March, though during 1-4 April seismic patterns were similar to those recorded before an eruption in 1988. The Alert Level was raised to 2 (on a scale of 1-4); visitors and residents were warned not to approach Banda Api within a 1-km radius of the summit area.

A M 6.7 tectonic earthquake occurred 150 km SE of Banda Api on 17 June (preliminary epicenter 5.58°S, 130.88°E). Activity consisting of a white plume, reaching 100 m above Banda Api's crater, was reportedly observed after the earthquake. However, photographs taken during a climb to the crater 24-26 April showed no plume or gas emission.


Local seismicity but no change in volcanic activity

On 8 September, eight earthquakes were recorded at the Banda Api observatory post, the first seismic activity there since the 17 June regional earthquake. No change in the activity of the volcano was noted.

Banda Api erupted on 9 May at 0630, ejecting a 3-km-high column of gas and tephra that included large incandescent blocks. Explosions continued through 10 May, accompanied by the production of a single lava flow [but see 13:5] that advanced eastward from the summit toward nearby Neira Island. The explosions originated from a line of five craters that probably follow a N-S fissure [but see 13:6] crossing the summit. [The eruption was preceded by several days of increasing seismicity, as follows (date, recorded/felt): 2 May, 11/3; 3 May, 1/0; 4 May, 51/11; 5 May, 110,11; and 6 May, 75/11.] On 8-10 May, earthquakes were felt every few minutes at the village of Neira, ~ 2 km E of the summit.

About 1,800 residents of the island have been evacuated to Neira Island and to the larger Lontar Island to the south. More than 5,000 of Neira city's ~ 6,000 inhabitants have also been evacuated to other locations on Neira and to Lontar Island. VSI operates an observation post at Neira city, equipped with a radio and a seismometer. VSI observers left from headquarters for Banda Api on 10 May.

Banda Api began to erupt on 9 May at 0630. Two simultaneous eruption columns rose 3-5 km, and three lava flows were extruded. Explosions and lava production continued through the day from craters on the N and S flanks, 1.2 km apart. The activity was more explosive on the S flank than on the N flank. At about 1130, the vertical eruption column from the S vent was briefly deflected to the S, thereby blasting or spraying tephra over a wide area of the western tip of Lontar Island (<1 km from the S end of Gunung Api Island). The duration of the directed blast was less than a minute, and eyewitnesses report that "the entire eruption column bent sideways to the S." This deflection was probably caused by slope failure above the vent. Material slumped into the vent and temporarily deflected the eruption column to the S.

A small volume of lava was erupted on the SSW flank at Pintu Kecil (mainly from a vent at 150-200 m elevation) and entered the sea along the S coast. About 50 m E of this flow, a small fissure opened at the coastline and produced a phreatomagmatic deposit of several hundred cubic meters. This deposit was being rapidly eroded when examined on 17 May. Two large lava flows emerged from two fissure craters ~ 400 m apart on the N and NW flanks (at Batu Angus and Pasir Besar). The lower crater was at ~ 150 m elevation, and the upper crater at ~ 200-250 m elevation. The flow at Batu Angus had entered the sea by 1100 on 9 May and continued through 15 May, although most of the volume had already entered by 10 May. The Pasir Besar flow reached the sea on 9 May. A graben developed between the two N-flank vents, causing the two craters to coalesce, probably by late in the day on 9 May. At 2300 on 9 May, activity at the S crater died, and several hours later activity at the N crater also declined.

On 10 May, the principal activity was from the summit crater, with minor lava outflow continuing from the N crater. Explosions continued from the summit crater 10-15 May but at gradually diminishing levels of activity. By 16 May, lava on the N side (Batu Angus) had ceased flowing, although occasional phreatic explosions were occurring where lava had covered the littoral zone and entered the sea. All craters were quiet by 18 May.

The first few minutes of the eruption produced a pumice lapilli of light gray to beige color with prominent dark euhedral phenocrysts of pyroxene. Material erupted later in the day was more scoriaceous and darker in color. Samples of the three 9 May lava flows are similar in hand specimen; dark gray to greasy black plagioclase pyroxene (hypersthene?) phyric lavas. No olivine has been positively identified in hand specimen.

Through 27 May, > 7,000 inhabitants from Gunung Api, Neira, and Lontar Islands have been evacuated to Ambon Island, 200 km NW of Banda Api. Three people were killed during the eruption, two in a boat mishap while evacuating the island.


Steaming and seismicity; many evacuees return

The violent ash explosions and vigorous lava production that began 9 May had subsided by mid-May (13:05). Activity had been concentrated at two vents on the N flank and at numerous vents on the S flank, along a fissure oriented NNE-SSW. Most of the 9.4 x 106 m3 of lava was produced during the first 12-18 hours of the 9-15 May eruption. The flows in order of decreasing volume are: NW flank (Pasir Besar), N flank (Batu Angus), and the two S-flank flows. A persistent white steam plume rose 50 m above the summit vent during June. Approximately eight A-type and eight B-type earthquakes were recorded daily. VSI installed three additional seismometers, including two on Gunung Api.

Analysis of imagery from Japan's GMS satellite suggested that the eruption clouds reached much higher altitudes than indicated by ground observations. Coldest surface temperatures of eruption clouds measured by the JMA were -78, -79, and -67°C on 29 May at 0700, 0800, and 1100 respectively, corresponding to altitudes of 16-16.5 km above sea level (figure 06ban01f). Aerosol layers were detected at similar altitudes 1-2 months later by lidar in Hawaii and Japan. At Mauna Loa, Hawaii, very small fresh-looking layers were centered at 15.9 and 17.7 km altitude (just above the tropopause) in June, and a thin layer was evident over Fukuoka, Japan at 15.4 km, about 1 km below the tropopause, in early July (see Atmospheric Effects in SEAN 13:06).

Activity at Banda Api declined toward more normal inter-eruptive levels during August. Low-pressure fumes reached 25-50 m above the summit. A daily average of three tectonic and three volcanic events were recorded by seismographs.

By July 1989, the volcano's activity approached background level. White weak fumes reached 25-35 m above the summit crater and 5-10 m above the N and S craters during the last week in July. Three volcanic A-type, 49 volcanic B-type, one degassing, and 165 tectonic earthquakes were recorded.


There is data available for 27 Holocene eruptive periods.


There is no Deformation History data available for Banda Api.


There is data available for 1 emission periods. Expand each entry for additional details.


There are no samples for Banda Api in the Smithsonian's NMNH Department of Mineral Sciences Rock and Ore collection.